.
To Spread The Facts World Wide
To Give Others HOPE
I Have Been Fighting Cancer since 1997 & I'M STILL HERE!
I Have Cancer, Cancer Does NOT Have Me
.

Radiotherapy saves millions from cancer but can inflict cruel damage, now, at last, there may be an answer...

Perched on a wooden bench inside a metal tank, surrounded by people shrouded in full-face hoods with oxygen pipes, Michael Charter could have been forgiven for thinking he had stepped on to the set of a sci-fi film.

In fact, the former publisher and businessman was in a decompression chamber receiving huge bursts of oxygen in an atmosphere twice the normal pressure - equivalent to being 40ft under the sea.

The aim of the treatment, known as hyperbaric oxygen therapy (HBO), was to heal the internal damage caused to his bladder and bowel when he received radiotherapy for prostate cancer 17 years earlier. 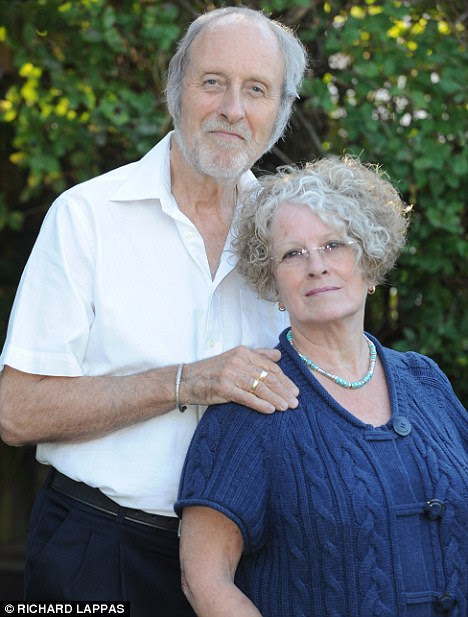 Fresh hope: Michael Charter and his wife Ingka. He is having hyperbaric oxygen therapy to counter the adverse effects of radiotherapy

'When my urologist suggested the therapy, I thought he was mad,' laughs Michael, 70, who lives in Devon. 'I'd never heard of it. But, as most people with significant and long- term radiotherapy damage will tell you, you will try anything to ease your symptoms.'

While radiotherapy is an effective cancer treatment - experts say it increases survival rates by about 50 per cent - it can damage healthy tissue around the tumour site.

Most vulnerable are the 12,000 patients a year who have pelvic irradiation for bowel, cervical and womb cancer, and those who are treated for head and neck cancers.

'We think that about 50 per cent of patients who undergo pelvic irradiation will suffer some radiotherapy damage,' says Dr Jason Lester, an oncologist at Velindre Cancer Centre, Cardiff.

'Some will simply suffer a change in bowel habits, but others may have distressing symptoms such as bowel ulcers, rectal bleeding, pelvic pain and a lack of bladder control. Some will need a blood transfusion, or even end up with a colostomy bag.'

Dr Lester is one of a growing number of cancer specialists referring these patients for oxygen treatment.

HBO was first used in the Thirties to treat deep-sea divers suffering from decompression sickness and trapped air bubbles (the bends) but quickly it was noted that the treatment aided wound healing.

Dr Phil Bryson, director of the Diving Diseases Research Centre in Plymouth, where Michael had his therapy, says: 'The principle behind HBO is very logical.

'We know the protein which controls cell growth and healing depends on oxygen. HBO delivers a huge amount in a short time, and research shows it stimulates this protein to work more efficiently.

'This is particularly relevant when you consider that radiotherapy damage is characterised by the death of the blood capillaries, which feed oxygen to the damaged area.'

As these capillaries die, the cells get less blood, hence less oxygen. The cells die and a wound forms. Then the cells around the edges of the wound become damaged by the inflammation and they, too, die, causing the wound to enlarge. 'It's a vicious circle and there is little medical treatment.

However, in some cases, HBO can halt or reverse that process,' says Dr Bryson.
Michael Charter was one of those to benefit. After being diagnosed with prostate cancer, aged 53, he had a biopsy and his prostate was removed in 1993. 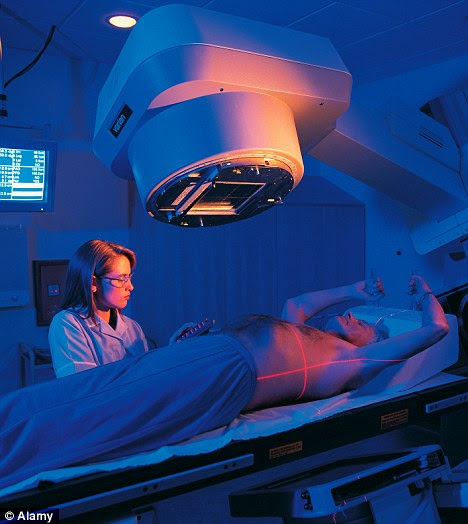 'The cancer had spread slightly outside the prostate,' he says. 'A biopsy showed that six per cent of the surrounding tissue contained cancer cells, but that was enough for my Harley Street specialist to order a huge dose of radiotherapy.'
Then, 15 years later, Michael began to suffer symptoms.
'My first symptoms were bladder leakage,' he says. 'Then the small leaks became large leaks, and suddenly I was wetting myself. I started using pads. I'd put one on in the morning and it might be full by lunchtime. There were accidents. It was clear something was badly awry.'
Michael's GP referred him to a urologist who said his situation was probably a side-effect of the surgery - and that little could be done.
'It was depressing,' says Michael, who is married to Ingka. 'From being sociable and outgoing, suddenly I was wetting myself, often in public. It was a terrible blow to my pride and self-esteem.'
Deterioration was rapid.
Within weeks of the first symptoms, Michael had passed blood in his urine, was suffering from painful bouts of cystitis and had bowel problems.
His urologist suggested he begin using a catheter to empty his bladder. But he still had to sleep on rubber sheets and take changes of clothes with him when he went out.
'If I'd been consulted, I would have been hesitant about such a large dose of radiotherapy'
All these symptoms are text book radiotherapy damage. Yet no one told Michael exactly why these symptoms had appeared.
'I thought I was simply living with the effects of having had cancer,' he says. 'It wasn't until I was referred to my current urologist in the autumn of 2008 that I first heard about radiotherapy damage.
'My urologist told me that today I wouldn't have been given such a large amount of radiotherapy, and that they might have adopted a watch-and-wait regime.
'That made me angry. If I'd been consulted, I would have been hesitant about such a large dose.'
Michael's story is not unique. While the damaging side-effects of radiotherapy have been recognised for decades, until recently patients weren't told of the risk. Partly this is because of concern that patients may refuse treatment if they knew the risk of damage.
This attitude has left generations of radiotherapy patients struggling to get a diagnosis - let alone treatment - for their problems. However, the bleak truth is that even when the patient is properly diagnosed there is little that clinical or pharmaceutical medicine can do to help.
'The worst aspect of the condition is that it will probably get worse,' says Dr Lester.
'Some doctors have tried rectally administering steroids to calm any inflammation.
'Others prescribe anti-diarrhoea drugs. But none of these treatments have been properly researched and, in my experience, none of them really work. Some may even make things worse.
'On the other hand, HBO therapy offers the possibility of improvement. The worst that can happen is that there is no improvement at all.'
But, because relatively low numbers of radiotherapy damaged patients have received the treatment, and no results have yet been collated, there has been no definitive research to show the oxygen therapy can help. It is a situation that many clinicians find frustrating, as it means the treatment is not recognised by NICE.
Patients who wish to use it must apply for funding on an individual basis. Fortunately, this lack of research may be about to change. In a world first, a trial carried out at the Royal Marsden Hospital in conjunction with the Institute of Cancer Research is aiming to establish whether HBO therapy does reverse symptoms.
Michael believes he already has the answer to that question. Initially denied funding by his local health authority, after the intervention of his urologist the money was found for him to attend his first course of treatment in February 2009.
'I went for 40 treatments over five weeks, and then, this year, I had a top-up of 20 treatments over two-and-a-half-weeks. Each session lasts between two and three hours, which includes three half-hour sessions of breathing pure oxygen through a hood.
'The chamber often feels warm and your ears pop as it is decompressed. There is always a medically trained attendant and usually up to nine other patients in with me.
'Each time, the results were astonishing. My bowel problems disappeared completely within days, and although I still have to use a catheter and wear pads, I'm usually dry for a night.

'To someone who has never had to use pads, it is hard to explain just how wonderful that feels.

'I am aware that, because the radiotherapy damage is continuous, the benefits of the oxygen therapy will start to wear off after time, but I am due to go for another course next year, which I hope will continue this pattern of improvement.
'HBO has given me hope that I can reverse some of the worst effects. That is a priceless gift.'

.
To Spread The Facts World Wide
To Give Others HOPE
I Have Been Fighting Cancer since 1997 & I'M STILL HERE!
I Have Cancer, Cancer Does NOT Have Me
I just want to say sorry for copping out at times and leaving Lee and friends to cope!
Any help and support YOU can give her will be hugely welcome.
I do make a lousy patient!
.
If YOU want to follow my fight against Cancer from when it started and I first presented with symptoms see The TAB just below the Header of this Blog. called >DIARY of Cancer< just click and it will give you a long list of the main events in chronological order.
.
Thoughts and comments will be in chronological order in the main blog and can be tracked in the >ARCHIVE< in the Right Sidebar.

You may find the TABS >MEDICAL LINKS< and also >CANCER LINKS< of help.
.
YOU are welcome to call me if you believe I can help in ANY way.
.