Full marks to the Vampires of Velindre and now that I am glowing like a Ready Breck extra I'm off to bed so I'll come back and write this up later!

Suffice to say THANKS to the Ladies team at Velindre ;-)

thats better at least I had some sleep ;-)

Increasingly since yesterday morning my lower back is giving me grief but it is an old injury that comes back to cripple me for a couple of days every so often - nothing to do with this bout of cancer, though my natural spinal lordosis has been exacerbated as a problem by scoliosis (the sideways deforming of the spine) which has been caused by the full nephrectomy wound herniation of my original radical nephrectomy scar!

The weight of the hernia on the left side has marginally and increasingly distorted the spine.

Anyway back to yesterday!

Whether the joys of prostate enlargement, the cancer or just that I knew I had to get up early, something I have never been good at in British weather! eventually awake at 0610hrs. I listened to the radiop until the alarm triggered activity at 07:00hrs.

Never having had to confront the so called rush hour traffic of Cardiff and aware that I had to be at Velindre at 09:00hrs. and not knowing Cardiff I set out at 07:50hrs. to be on the safe side.

Unemployment in Wales must be much higher than the statistics would indicate as if that was the rush hour what on earth did they build the motorways for! No hold ups at any stage and I was also fortunate with parking as there seems adequate in the hospital grounds.

After the tedium of trying to park at The Royal Gwent:

which is a very large hospital with a large footprint on an over crowded site supplimented with permanent porta cabin extensions to provide A&E and the like, Velindre Hospital was a pleasure: 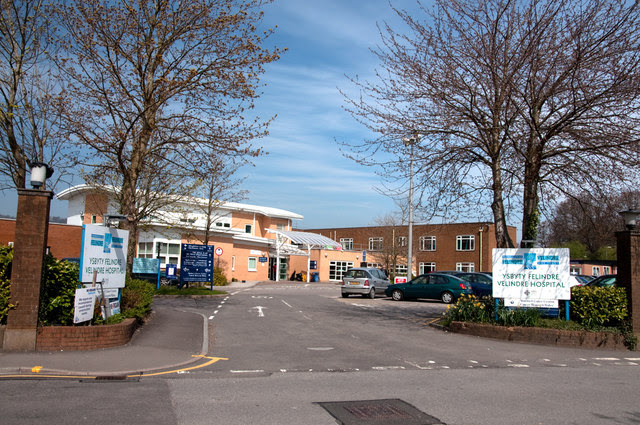 I found Nuclear Medicine without much problem and was in the waiting room when the staff arrived at 08:40hrs. and by the time they had found my notes from Dr. Lester's secretary and weighed me in at 97.4kg. plus measured me at 1m57cms. so I have lost about 2 inches in height over the years due largely to damage and injury!

They were ready to give me my injection at 08:50hrs.

Chromium 51 with a half life of 27.7 days! So now for the next month (almost) I shall be glowing in the dark!! So with special film we can make our own 'Ready Breck' adverts!

The carrier used was ETA or EDA - Ethyl Diamin Tetracetic Acid - but since I can't track this 'carrier' down I may be wrong!

Anyway a quick very small injection washing the syringe out by drawing blood into it and reinjecting.

The two nurses on the Nuclear Unit were very cheery - I guess they are used to wandering around at that time in the morning - even when we had the shop the sign on the door was 10:00ish. and I only had to come down a flight of stairs ;-)

Then two hours to kill for the blood to percolate around the body spreading the isatope - so I went off to the canteen and had some breakfast and a coffee.

Coffee has hugely improved in canteens with the new gereration of automatic machines but the food is still strange considering one is in a hospital! Very little sight of anything healthy to eat the eggs were some form of scrambled egg with little appearance of egg and rather more like polly filler they had very little taste and I'm sure if dropped they would bounce! the sausages, bacon etc. were fried and saturated in fat and the toast was, to say the least, tired! But I guess one is already ill if one is in the canteen at a hospital and it does explain why so many of the staff are eating out of plastic boxes they have brought themselves!!

Two hours reading in a canteen do NOT pass rapidly but then off to find 'Phlebotomy' to have a blood sample taken. With three staff taking samples and their own min reception the bloods unit miraculously works like clock work - literally with each patient having their own sample tray and electronic timer clock The first sample was taken at 10:50hrs. then after more coffee and an attempt to read The Guardian (what a rubbish paper - little news, much opinion and endless propaganda it is clearly written by about 3 people and a team of cut and paste kids from the internet, no wonder they lost £Millions last year).

Finally after my 12:50hrs. sample I was free to go and after a pleasant drive home I can now await Monday and the results of the test which I gather both counts red blood cells but more importantly measures the efficacy of my remaining kidney. I gather this will determine the dosage of chemo.

You may find the TABS >MEDICAL LINKS< and also >CANCER LINKS< of help.
.
YOU are welcome to call me if you believe I can help in ANY way.
.