Cryoablation can freeze out Kidney Cancer

Cryoablation can freeze out Kidney Cancer
.
Please Be Sure To
Tweet My Blogs
To Spread The Facts World Wide
To Give Hope & Information

By Alice Grebot
PUBLISHED: 21:59, 22 December 2012 | UPDATED: 14:24, 24 December 2012
A remarkable procedure that uses freezing gas to destroy kidney cancers is offering hope to the 8,000 Britons diagnosed with the disease each year. The technique means no stitches, just an overnight hospital stay, and faster recovery times than traditional surgery.

Kidney tumours are usually treated through open or keyhole surgery, with either the kidney, or a portion containing the tumour, removed.

With cryoablation, however, there are no large incisions. Instead, extreme cold temperatures are used to effectively freeze, and therefore kill, the cancerous cells. 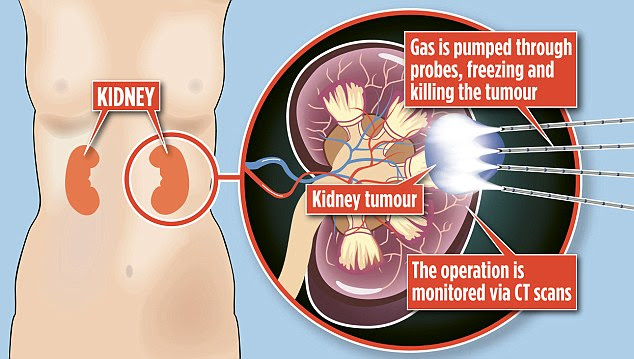 How it works: Argon gas is pumped through tiny needles to freeze and destroy the tumour
During the procedure, a number of fine hollow needles are placed directly through a patient’s skin into the tumour tissue, through which argon gas is then passed. This freezes and then destroys the cancer.

Patients usually leave hospital the next day and are able to return to work a week later. Other advantages include reduced risk of bleeding and infection, and limited damage to surrounding healthy kidney tissue.
It is suitable for patients whose tumours are less than 2in in diameter or for those where surgery is considered too risky.

Cryoablation can also be used to treat tumours of the bone and prostate.

It is a technique within interventional radiology, which  uses image-guidance – CT, ultrasound or MRI scans – in a similar way to  X-rays, allowing doctors to view inside the body and target treatments. ‘The idea behind interventional  radiology is to treat patients in the least invasive way possible,’ says Dr David Breen, consultant abdominal radiologist at the University Hospital of Southampton.

‘It offers a new area of treatments for cancer, as well as other conditions. Scanners are identifying cancers at ever earlier stages, so, in some cases, we’re able do less invasive procedures and avoid the need for surgery.’ 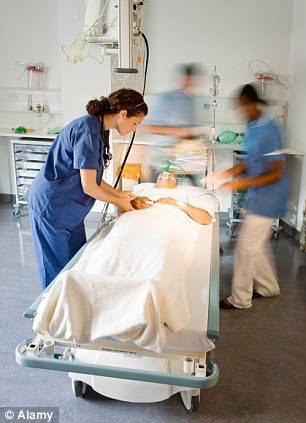 Speedy recovery: Patients who undergo cryoablation can usually leave hospital the following day
According to Dr Breen, cryoablation itself isn’t new; it has been used for some years, often in conjunction with keyhole surgery. What is new, he says, is the fact it can now be performed with the needles, also known as probes, being put directly through a patient’s skin. ‘It’s part of a growing trend towards less invasive procedures for small cancers,’ he says. ‘Results are outstanding and data indicates ablation may be equally effective as surgery for these small kidney tumours.’

Dr Breen performs the cryoablation procedure with patients under general anaesthetic. ‘Using the CT scanner to produce an image of the tumour, four or five probes are inserted,’ he says. ‘These needles are thinner than a pencil lead. Gas is passed through the probes, which makes the tips of the needles extremely cold – minus 150C. This generates ice around the probes to freeze and kill the tumour.

‘The process takes 30 minutes, during which we can see the ice growing on the CT scan and enveloping the tumour.’ Afterwards, the dead tissue withers away and is broken down over time. The procedure has negligible effects on kidney function.

In January, Danielle Norman, 33, from Southampton, underwent the procedure, after being diagnosed with a cancerous kidney tumour. ‘The recovery time of six weeks associated with normal surgery wasn’t possible for me, as I have two children, Niamh, seven, and Aedan, two,’ says Danielle.

‘I was referred to Dr Breen. I was a little sceptical, as the tumour isn’t actually removed, but he was very reassuring.’

Danielle underwent the procedure on January 24 and was back at home the next day. ‘I was a little sore but within a week it was as if nothing had happened.’ Danielle has a few tiny scars where the probes went in. Her follow-up scans show a good outcome. ‘At a scan in August, the doctors said they can see the tumour is shrinking, which is great,’ she says.

To read the original article CLICK HERE
.
.
Please Be Sure To
Tweet My Blogs
To Spread The Facts World Wide To Give Others HOPE
I Have Been Fighting Cancer since 1997 & I'M STILL HERE!
I Have Cancer, Cancer Does NOT Have Me

I just want to say sorry for copping out at times and leaving Lee and friends to cope!
Any help and support YOU can give her will be hugely welcome.
I do make a lousy patient!
.
If YOU want to follow my fight against Cancer from when it started and I first presented with symptoms see The TAB just below the Header of this Blog. called >DIARY of Cancer< just click and it will give you a long list of the main events in chronological order.
.
Thoughts and comments will be in chronological order in the main blog and can be tracked in the >ARCHIVE< in the Right Sidebar.
.
You may find the TABS >MEDICAL LINKS< and also >CANCER LINKS< of help.
.
YOU are welcome to call me if you believe I can help in ANY way. .